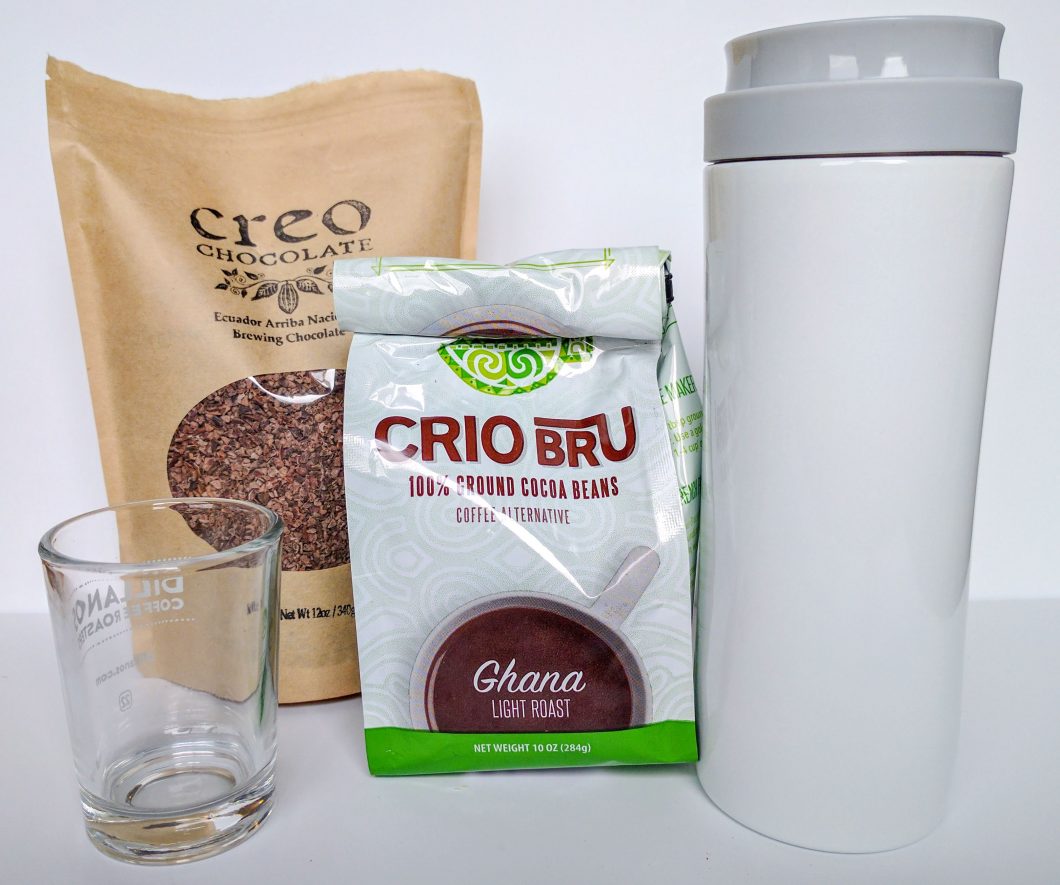 Drinking cacao, or brewing cacao, is trending. Which makes sense: it’s soothing, full of antioxidants, and yet it’s fairly low calorie with a chocolate boost. So let’s talk with one of the pioneers of drinking cacao, Crio Bru’s Dr. Eric Durtschi!

Note: this is from the 2017 archives of Seattle Dessert Geek, my old blog. Moving some posts over, including this one because Dr. Durstchi was kind enough to take time during the busy Winter Fancy Food Show to answer my questions.

Drinking cacao is what it sounds like: cacao beans, crushed past the nib stage, so you can steep/brew it like coffee or tea. I first found out about it at Intrigue, where Aaron also makes it into cacao au lait. Then last year it felt to me like it was everywhere in bean-to-bar land: Creo Chocolate had a version for sale at the NW Chocolate Festival, and now Crio Bru, the biggest brand, is going the k-cup route with their blends.

So when I was at the Winter Fancy Food Show, I was excited to get in an interview Dr. Eric Durtschi of Crio Bru. After all, bean-to-bar still is barely mainstream, drinking cacao even less so. And Crio focuses its branding on being a coffee alternative, which is pretty fascinating to me. Chocolate, for coffee drinkers!

Here’s the interview! Have you tried drinking cacao yet?

Jess: Thank you for taking time to meet with me, Eric! So first, I’m excited you have k-cups now. Are you seeing them change how people see your product?

We are a natural, health oriented product, and our customers like to know that we’re doing all that we can to protect the environment. Our first run I didn’t fully understand how important that was… So our next run will be fully compostable, have a better filter, a finer grind.

And one of the issues we have with regular ways of brewing it is it being brewed wrong. It’s hard to do it wrong in a k-cup.

We have a new chocolate line that we launched last year, so I am expanding that with some new varieties, [and] we also have some chocolate covered products that we’re going to release. I’ve also been developing some instant options that are pretty phenomenal.

We need to hear about that instant option, because that sounds awesome.

Yeah! So I’ve found a way of preparing basically like cocoa powder, but it’s a powdered version of Crio. And in fact it has more health benefits than Crio. It does have a little bit more calories, but not much. And, in my opinion, it tastes just as good if not possibly better.

We’ve also developed a ready to drink [version], so that’s something that we hope to launch in the next twelve to eighteen months. Just trying to find ways to continue to innovate and expand and show people that cacao is so much more than just chocolate bars.

Are you seeing a huge connection with paleo for Crio Bru?

Definitely. We are also a Whole 30 approved and recommended product. The owner, Melissa Hartwig, she swears by us. It’s a lifesaver for a lot of her clients who are used to drinking coffee.

What would be the most opulent version of Crio Bru?

French press. And I brew it at least twice as long.

Please tell me you’ll have a pop-up cafe for that in Seattle, because that would be awesome.

Well, after this show I’m actually heading down to Santa Barbara. We’re looking to open probably at least one of two cafes there there year. We’re going to offer anything and everything  cacao. We’ll have drinks, we’ll have chocolates, we’ll have desserts. It’ll be decadent and healthful.

Note: This interview has been edited for length. I was also given free product from ESPRO and Crio Bru for helping me with preparing this interview; all opinions are my own.