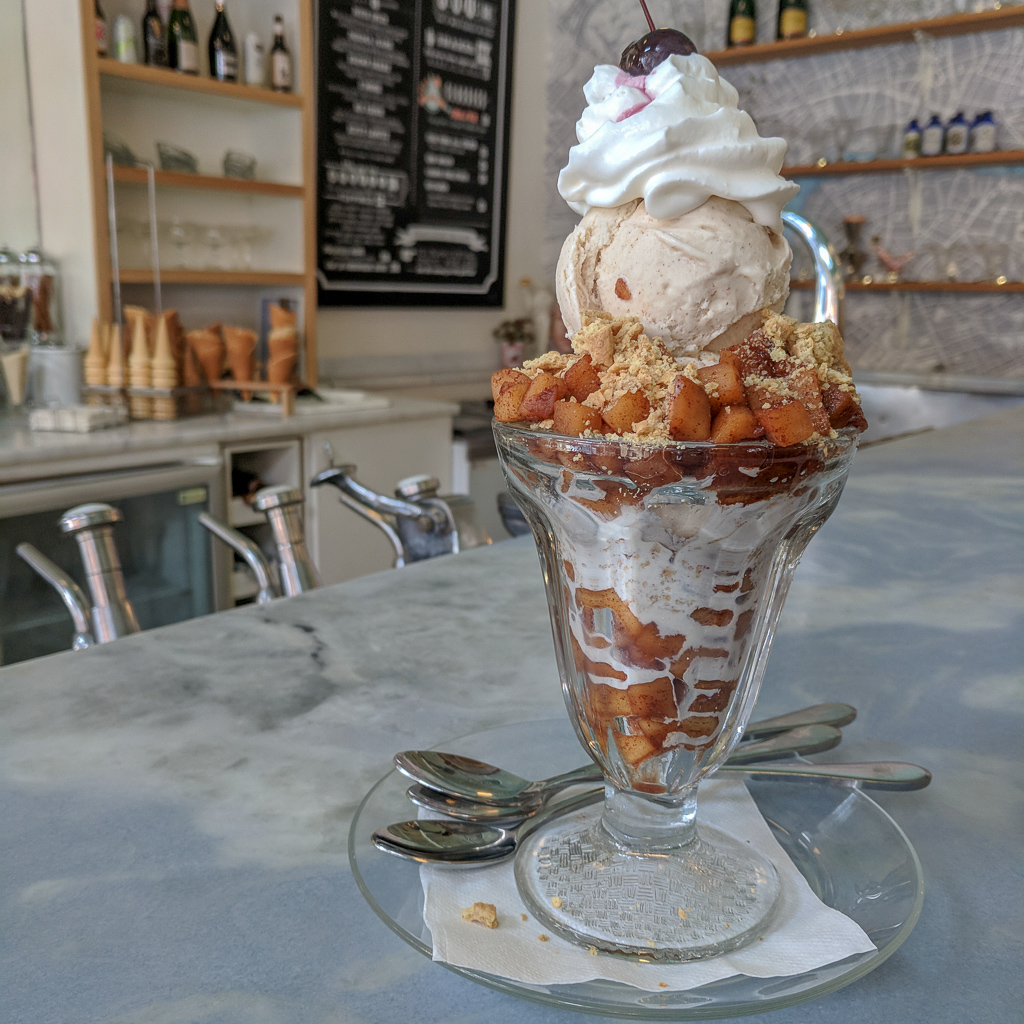 Because if you’re only living once, you might as well go on a sundae bender with two of your friends, right?

I’m going to break this down into two parts: the experience, and the sundaes. Even without being hosted, I just really like going to Shug’s. I’ve been going since the first week they opened, and it makes me long for a time that never existed, or a time that could have existed. One where a bunch of friends could go for ice cream on a slow summer day after adventuring all afternoon, and watch the sunset. It feels like stepping straight into comforting nostalgia, even if the music can often be current.

The music doesn’t matter. You’ll get distracted by the sundae the size of your head fast enough.

Also, bringing two friends for this particular endeavor? Critical. Because nothing can prepare you for eating six sundaes. (And it’s way more fun.) Before we get into the sundaes proper, it’s worth knowing that they all have a few things in common. Most importantly, the ice cream itself. It’s from Lopez Island Creamery, which matches the sundaes wonderfully with a fluffy-soft retro ice cream texture. Especially when covered in hot fudge.

Also, they’re huge. Qualifies as a meal huge. The smallest is the S’more, and that’s still a test to your stomach’s ice cream limits. (They’re also all ~$9, but that matches with how huge they are.)

Now on to what you care about: the details on the sundaes themselves. Let’s break it down. It seems simple enough: three scoops of ice cream, chocolate sauce, a topping. I opted for trail mix. It wouldn’t remotely convince me that I was eating something healthy, I just really like trail mix.

Then I convinced Colleen to add cacao nibs, since the trail mix wasn’t quite what I wanted, and that was lovely. There’s a really lovely earthiness to the nibs that really elevates the ice cream. Sure, it’s simple, but far greater than the sum of its parts. (Though I’d be quite happy with one scoop, chocolate sauce, and that modified trail mix. Three scoops is huge.) This time a donut is involved. (A vegan cake doughnut from Mighty-O, to be exact.) Which means there’s a cakey goodness soaking up the ice cream as it melts and it’s covered in hot fudge.

This was actually the first sundae I ever ordered from Shug’s when they first opened, and it’s still one ridiculously large treat.

We’re talking cinnamon ice cream, apple compote, graham cracker crumble, and whipped cream. It really does feel like eating apple pie in sundae form, and it is delightful. I feel like it gets overlooked by the other, more fire-involved players on the menu, but it is worth a look if you like apples and wished they were in more sundaes.

This trip was my first time trying it, as I also usually get way distracted by the S’more and Norma Jeane. I am definitely ordering it again.

(Sadly, this awesomeness is now off the menu. Here’s hoping it returns in the fall.) One of my two regulars. I order it without the optional bourbon mist, but there’s something so lovely about chewy blondies, caramel, and sea salt. And, of course, all that ice cream. It’s a more refined sundae than most of the options, but lovely. You get this for two reasons: you like marshmallows, and you like watching marshmallows roasted on top of your sundae. (No, you don’t get to roast the mallows to your liking.) If I need to actually sell you on this, it’s because you’re not sure if marshmallows, graham crackers, and hot fudge belong on ice cream. Spoiler alert: they totally do.

If you can, let some of the marshmallow stick around for more than five seconds. They’re homemade, and become a soft marshmallow sauce as they pool over the ice cream. Totally worth it. Ah, yes. Their version of the banana split, with bruleed banana slices, candied pecans, caramel, whipped cream, and a cherry on top.

It’s a delight to watch get made. The bananas are bruleed to order, and because of all the components it’s like watching architecture get formed.

Honestly, it’s the one I’m least likely to order. I don’t know why, either. I mean, it has more going on than the Big Eddie or Brown Derby, so you’d think I’d instinctively go for the Dixie. Especially since candied pecans are involved, which are awesome. I think I want more out of it, which really could be solved by ordering more than just vanilla ice cream.

And for even more details:

My favorites? The Norma Jeane, Kitty Canutt, and S’more. I’m super excited to add the Kitty Canutt to my regular lineup, because it’s just so fun!

But really, the actual best part? Once the shooting stopped, Paige (@seattleontherun), Janee’ (@the_mobile_monger), and I sat down with Colleen, the owner of Shug’s Soda Fountain, and just sat. And chatted. And ate ice cream. It was so dang relaxing to just sit there and listen to their stories. (And I talked a lot. As I do.) It might not be nostalgic, but it was wonderful.

Thank you, all of you. We need to do that again!

P.S. Shug’s covered all of the ice cream shown here. Thank you again for hosting us!