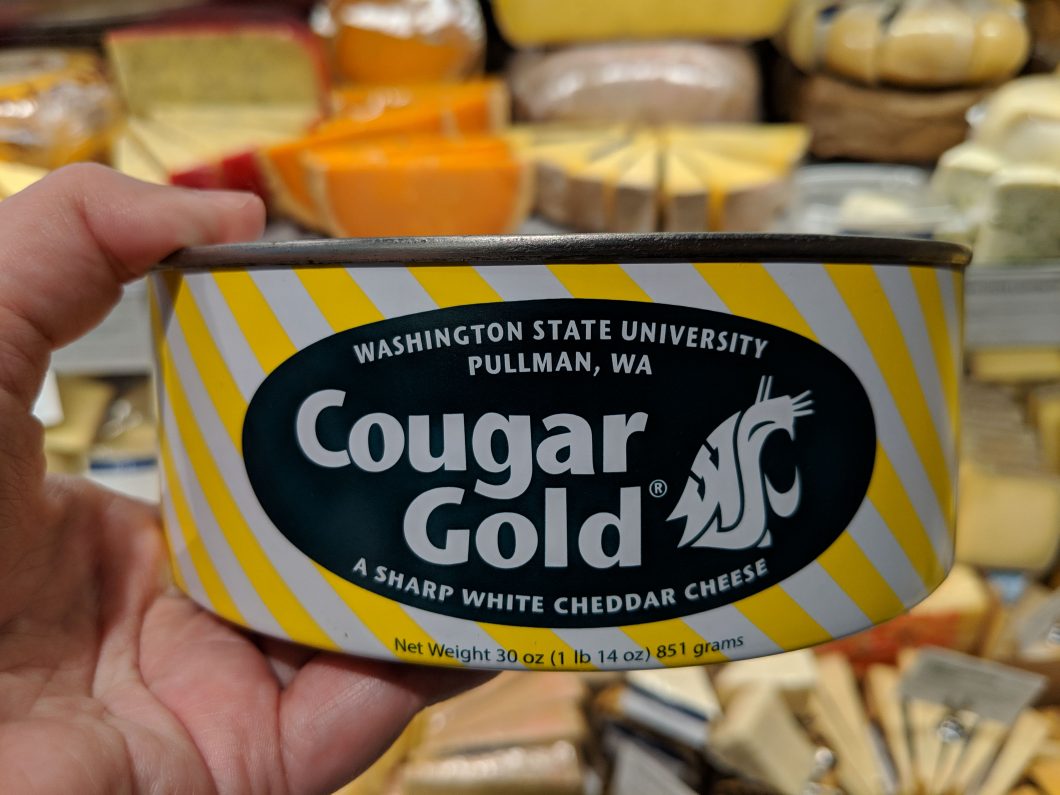 Not remotely an April Fool’s prank. These are all totally real – and totally delicious.

Seattle does have some pretty unique food items. After all, we’re a major port city, with a long history of First Nations folks settled here along with waves of migration, from Japanese to Hmong and beyond. If stuff didn’t get interesting just from people bringing recipes ideas with them, that would be sad. Though I’m kind of bored of hearing about Seattle dogs. You know when you get Seattle dogs? When you have a visitor from out of town. (Or maybe when you’re at a game? There are so many hot dog vendors by the stadiums.) I usually just prefer my hot dog with caramelized onions, and sadly my favorite vendor, Beez Neez, may have stopped selling in Seattle. Their Twitter is dead and I haven’t been to Occidental on a Thursday in weeks, so I need to bite the bullet and check that.

So in honor of Seattle dogs and the largest cheese in a can, let’s talk about some of the most uniquely Seattle foods!

While from Washington State University, so it’s not a unique Seattle food per se, Cougar Gold Cheese is so unique and so epic that it totally deserves to be here.

I feel like I should mention that Cougar Gold is actually quite good. It’s a year aged cheddar, and has this wonderful sharp bite from all the crystals. If you like Beecher’s Flagship but feel it’s just a skosh mellow, you’re going to love Cougar Gold.

What makes it unique is how it’s sold. First, it’s in a can. Second, each can contains thirty ounces of cheese.

Yeah, you basically only open these for parties.

Occasionally WSU takes pity on us mere mortals and offers smaller, more reasonable cans, but I haven’t seen those in years. On the other hand they’ve set a monthly order limit of eight cans per month on their site, so someone out there is having some amazing cheese parties. And I did find out that at least one PCC out here sells Cougar Gold by the ounce, so you can try it for yourself in a reasonable (or unreasonable) quantity.

Hot Zombie requires a bit of an explanation.

There’s this place, Intrigue Chocolate in Pioneer Square, that makes truffles with unusual ingredients, like juniper or carrot. (Their everything bagel truffle has a super intense following and I am totally part of it.) On the first Thursday of each month from 6-8 pm, Aaron and his team take the leftover truffles and melts them down into a hot chocolate with cream, sugar, and salt. That is Hot Zombie.

There are usually 20-30 flavors in it. I’ve found that normally one note dominates and then you taste 5-6 more. The rest kind of melds together into ‘chocolate’ and it’s lovely.

While it’s only available the first Thursday of every month, on the plus side it’s free. Rejoice! Bring a friend! (Extra bonus: sometimes it’s so thick you can take it home, put it in the fridge, and you’ll have a truffle in a cup the next day.)

Kind of like Cougar Gold, this is about the presentation. Because Ellenos is Greek yogurt that can double as pie filling.

No, seriously. In November they sell a pumpkin pie laced with chunks of pumpkin pie. And even if you’re not going full pie, there’s lemon curd (with lemon curd), marionberry pie (with marionberry jam and streusel topping), and way more. It’s as thick as a Dairy Queen blizzard, and sweet-tart with that lovely yogurt tang. So dang good. Even the unsweetened version is great for taking home for breakfast or smoothies.

If you go to Pike Place Market, their most popular location because of the photo ops, or the farmers markets they sell at, you can get a single serving to walk around the market with. I think it serves two, but I also can get my hands on this yogurt any day of the week. (Most of the grocery stores in Seattle sell Ellenos, though the pumpkin pie is less ‘chunks of pie’ and more ‘pie filling’ in stores.) My opinion on serving size isn’t exactly important here. Get what makes you happy.

While this isn’t unique to Seattle (hello Alaska!), it’s so tasty I can’t ignore it.

Unless you live in the Pacific Northwest or Alaska, you have not fully seen the fishy bounty that exists past smoked salmon and lox. There’s smoked salmon, sure, but also salmon jerky, canned salmon by the species, and, my personal favorite, salmon candy.

Before you get all grossed out at the name, it’s a smoked salmon that has a rub heavy on the sugar and usually served in bite-size chunks. It’s sweet, smoky, salty, and briny, and wonderful to snack on. And it’s an awesome introduction to smoked salmon in general, since it’s not as intimidatingly fishy or intense as lox can sometimes be. (I may love a good lox, but we all start somewhere, and this is an awesome start.)

There are enough unusual ice creams in Seattle – and a few soft serves – that covering this properly will really have to become its own post. And I know a lot of folks are used to Salt & Straw’s lineup, but Seattle has not been slacking on ice cream flavors.

Kurt Farm Shop regularly carries cheese ice cream (Flora’s cheese) in addition to rotating flavors like tomato jam and Sichuan peppercorn. Frankie & Jo’s has chaga mushrooms in one of their options right now. Parfait at Trove basically tries to do everything from ube to champagne. Central District Ice Cream Company is making salted duck egg ice cream. And Homer was going through a phase where they had pine soft serve.

And that’s it! (For this post at least. I could go on about everything bagel truffles for ages.) Do you have a favorite unique Seattle food?