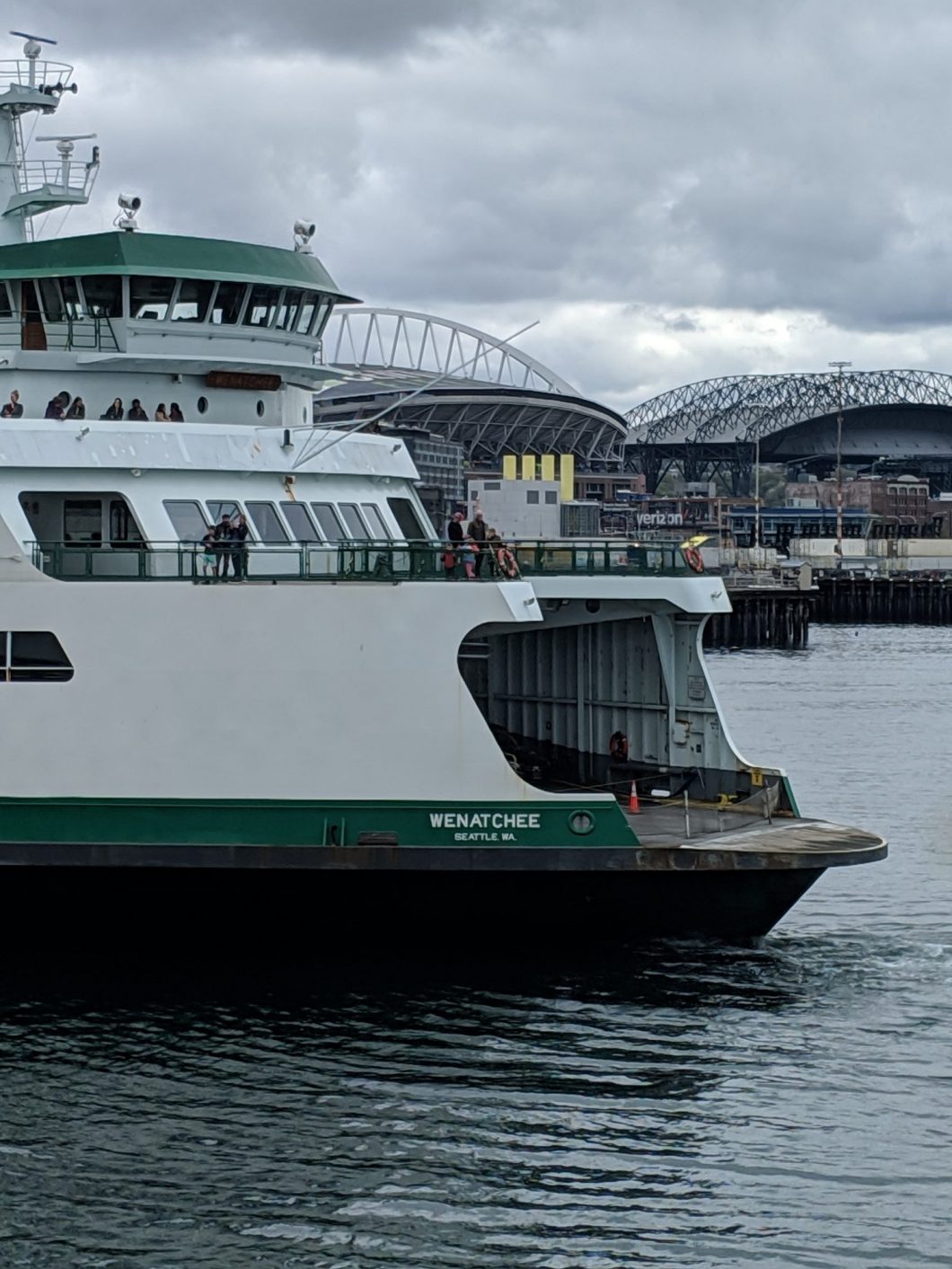 If you’re coming to Seattle, you’ve likely been told you’ve got to take a ferry. But where to? And, more importantly, what desserts can you get? Welp, let’s talk boats.

When I say ‘ferries’ here, I mean large, fairly slow moving boats that can carry both passengers and cars. (Though check to make sure your car can make the crossing before you go.)

The main terminal is the Seattle Ferry Terminal on the south end of the Seattle waterfront. But if you’re feeling adventurous, you can go north to Anacortes, the ferry terminal to Friday Harbor and the gateway to the San Juans. Or to the south, where the Fauntleroy terminal will get you to Vashon Island. And that’s not even all the ferry terminals. You’ve got options.

If you have to choose one ferry trip, you should absolutely go to Bainbridge Island. It’s a thirty minute trip from downtown Seattle and the boat drops you off right beneath the adorable town of Winslow. This tiny town is packed, with adorable museums and shops and so much food for a town center maybe five blocks long. Give yourself a minimum of two hours on the island so you don’t rush too much, and make sure to go to Blackbird Bakery on the way out for a ferry snack.

As for the ride, you’re not going to go super fast, so it’s a really pleasant time. You’ll feel some vibration from the ferry moving but even most people with seasickness do all right. You can walk around the ship, charge your phone, have lunch, get some work done, even grab a cup of coffee. There are even multiple decks and levels so you can change your view and get some fresh air.

In terms of how full a ferry might be, it’s usually crowded during commuter hours and basically any time there’s sun during the summer. Going at 10 am on a cloudy Tuesday in the spring is going to be pretty chill.

(Pro tip: the Chinook Book usually includes some sort of discount for the ferry – and the buses. Go check it out! I’m not sponsored, I just think the Chinook Book is an especially good deal here.)

These ferries are, well, fast. But there are also only two routes – for now. (It’s going to expand in 2020 to Southworth, and possibly later to Tacoma. Fingers crossed.)

The route you care about is Seattle to Bremerton. This is a ridiculously speedy thirty minute trek compared to the regular ferry’s sixty. And they are passenger-only ferries. (You’re also allowed to bring bikes, but no cars.)

Why am I telling you to check out Bremerton, you might ask? It’s only home to Saboteur, a ridiculously good bakery, and Cafe Kai, one of the few musubi, or Hawaiian style rice ball, shops in the entire Seattle region who also hosts Hawaiian food pop-ups. Just saying. And it’s much easier to convince yourself to go if it’s only thirty minutes away.

The caveat: in the off-season (everything but summer), it’s only commuter hours – and even those are super limited. Seriously, the last morning ferry from Seattle departs at 8:30 am. On the plus side, they take reservations, so you can guarantee a spot on one of those coveted boats. (Which you will want. Dear goodness, you will want them.) They are working to get more boats to meet demand, but you should plan ahead anyway.

One big thing to note is that the fast ferry doesn’t allow for any movement on board once they’re in motion. You are not leaving that seat unless you absolutely cannot wait to use the restroom.

There are two water taxis: Seattle-West Seattle and Seattle-Vashon Island. Both currently pick up at the ferry terminal at pier 52.

These are fast, passenger-only ferries, about the same size as the fast ferries. (You’re also allowed to bring bikes, but no cars.) And like the fast ferries, they’re fast. As in, the West Seattle crossing can take as little as ten minutes.

Both routes are worth taking. I mean, Vashon has the Sheepdog Classic coming up and an adorable downtown core. But I recommend the West Seattle route because it drops you off at Marination Ma Kai, so you can now walk around Alki with tacos and shave ice. You’re welcome.

If it’s nice out, I’d recommend sitting on the back of the boat. It can be loud, but it has a great view of Seattle – and sometimes you get to see (and hear) sea lions!

Are you thinking of taking a Seattle ferry? Which routes are you curious about?